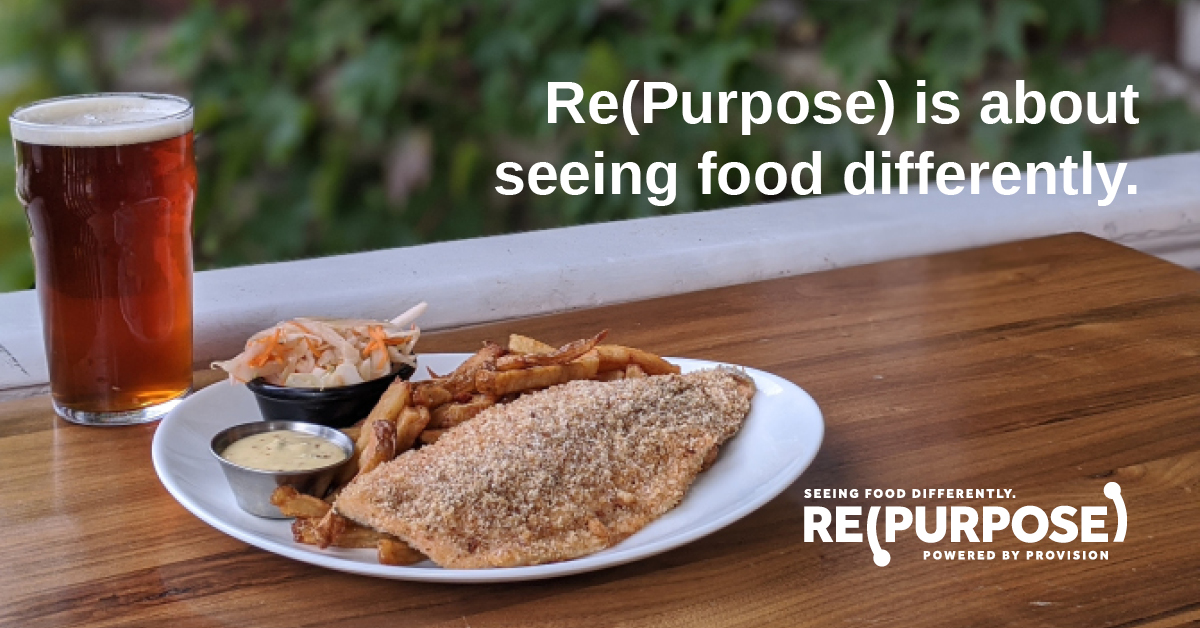 “What if” waste didn’t have to be wasted?

Sometimes it’s the crazy ideas that make a difference.

Ideas like what if we could make a gourmet restaurant meal from unavoidable food waste?

Yes, I know. It sounds gross. But bear with me, you’re going to want to hear this.

This week we will be launching exactly that. A restaurant meal sourced from unavoidable waste. And I’m going to tell you the story of how this crazy idea turned into one of the most exciting things to happen in food this year and one of my prouder moments…

It all started, as so many good things do, with beer.

Specifically, with an unavoidable waste by-product from the exceptionally good beer made by our friends (and client!), Wellington Brewery in Guelph, Ontario.

Each year, Brent Davies and his team at Wellington Brewery produce tonnes and tonnes of spent brewers’ grains (like so many other breweries). And while they had found a farmer who was happy to nourish his pigs on them, we wondered if there was a way to capture more of the nutrient value of those grains. Not to take away from the pigs, but you need three kilograms of feed to make one kilogram of swine protein – and that’s not a particularly impressive ratio.

What if those grains could be fed to insects instead?

Insects are actually dozens of times more effective at turning feed into protein. And what if that insect protein could then be consumed by other livestock, making the whole system more effective?

A local insect farm, Oreka Solutions, just down the road in Cambridge, Ontario – was already doing just that. They had found a way to incorporate the grains into their feedstock to feed to their bugs!

And that’s when it hit us. Could we connect Oreka to a local fish farm, to a local restaurant and start the first ever circular meal? What if?

In stepped Izumi Aquaculture and the Neighbourhood Group of Companies.

Wayne and his team started feeding Oreka’s insect-based feed to their fish.

The Neighbourhood Group of Companies is Canada’s largest group of B-Corp restaurants and a firm clearly committed to sustainable practices (including being the first restaurants in North America to have DNA tracing on their fish to ensure their sustainability). Court Desautels, their President offered to bring Izumi trout to three of his restaurants in Guelph, Ontario.

But a piece of fish sitting all alone on a plate isn’t particularly inspiring or appetizing. So we looked again at the other unavoidable by-products from these three companies: Oreka, Wellington and Izumi to see if we could help generate some other ingredients to accompany the fish.

Now, like all animals, fish poop. And fish detritus (the technical term) is also high in nutrients, if only it can be captured and used. Izumi Aquaculture is set up to do just that, and so was born the idea of creating a natural fertilizer for a potato farm. And in stepped Smoyd Potato Farms.

So now we had fish, potatoes and beer. The meal was starting to come together.

Back to Wellington for a moment, because not all the spent grain was able to find a home with the bugs.

We had heard about a movement in the bakery industry to create bread from re-purposed grains, so we reached out to Dave McCrae from Grain Revolution – an organic Guelph baker - and Richard Preiss from Escarpment Labs – a yeast lab, and they began the alchemic process of working out how to create a sourdough from waste grain and yeast.

So now we had bread, fish, potatoes and beer. It was time to bring in the chefs at the Neighbourhood Group, who crafted three creative menus from these circular ingredients: sourdough-crusted fish and chips at one restaurant, a trout-sandwich at another, and a gravadlax-trout on sourdough at a third.

And what started as a crazy idea – to create a gourmet meal from waste – has become reality.

Now called Re(PURPOSE), because we thought it deserved a name, this circular food experience, will launch this week with the support of three levels of Canadian government.

And while this is pretty cool, the bigger implication is even cooler: Re(PURPOSE) proves that it is possible to create food out of waste. And given that North America is still producing over 150 million tons of food waste per year, the implications are huge.

And that really is the point.

But the real power here is to recognize what can happen when we choose to stand in what if?

We are not going to change our broken food system without what if?

We are not going to become more sustainable without what if?

So my invitation to each and every one of you reading this is to join the Re(PURPOSE) movement.

Let’s start, together, creating circular food experiences. Wherever you are in the supply chain, or you have by-products. Let’s use those by-products to create something new, a new product, a new meal, a new experience – a new way of seeing food.

Let’s show not just that it is possible, but that it’s economically viable and even advantageous to create circular food experiences and opportunities.

And then let’s tell those stories, to inspire more and more people to see that a sustainable, circular food system and economy really is possible.

Because sometimes it really is the crazy ideas that make all the difference.