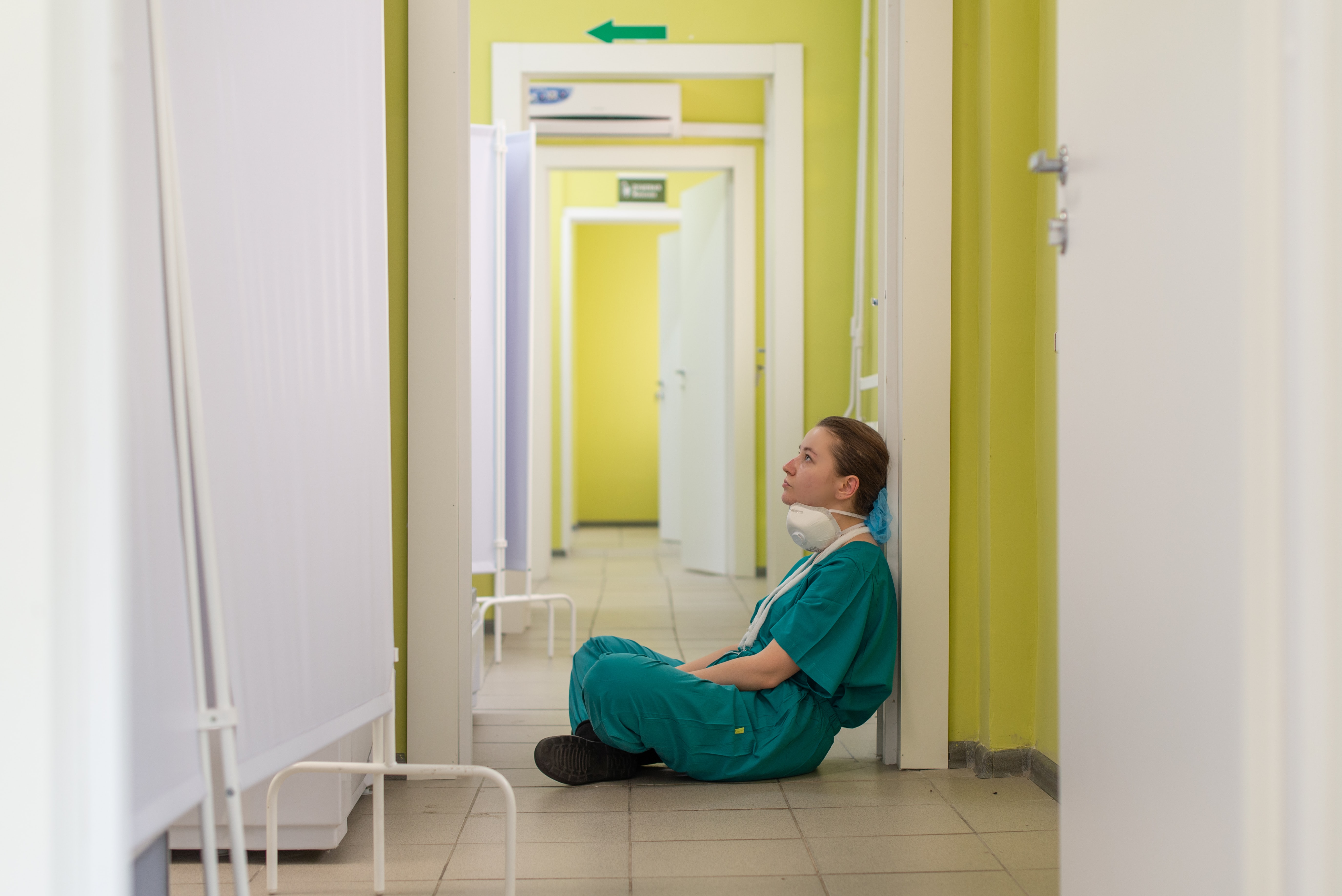 Climate impacts have mostly been seen through the lens of the economy and the environment. Today, for the first time on a massive scale in the developed world, we are being brutally exposed to the human costs of climate change.

The grocery store shelves are filling up again. You can even buy toilet paper.

After a couple of weeks of panic buying, it looks like our food system has responded relatively quickly to COVID-19. Media and podcasts are telling stories of how food destined for restaurants is being re-purposed to grocery stores and how food companies are working extra shifts to cope with all the demand.

But dig a little below the surface and all is far from well.

Our food system is broken. Globally we waste 1/3 of everything we produce and rely on a take-make-dispose system that damages soils, pollutes groundwater, contaminates air and fills up landfills, while billions of people go hungry every day.

Food depends on the natural environment more than any other industry. And yet, it is one of the biggest contributors to climate change.  Wasted food is the third largest emitter of greenhouse gases. Yes, that’s right, if food waste was a country it would be just behind China and the US in terms of carbon emissions.

The ingredients in each average meal consumed in Canada travel a collective 1,200 km before reaching your plate. They are sourced through globalized supply chains of dizzying complexity and almost total opacity (most food companies can only trace their supply chains back two or three steps).

Not only is the system broken, it is actually a significant contributing factor to the growth of pandemics like COVID-19.

As the global scientific community comes together in unprecedented ways to fight COVID-19, we are gaining a deeper understanding of the connections between pandemics and biodiversity. A new discipline of Planetary Health has emerged, focused on the links between the well-being of humans, animals and natural ecosystems.

As Joel Makower, the Chairman of sustainability analysts GreenBiz noted in a recent article, “researchers have long known that infectious diseases typically arise at the nexus between nature, agribusiness… and other human activity. The Ebola outbreak in West Africa was the result of deforestation, leading to closer contact between humans and wildlife. The avian flu was linked to intensive poultry farming”.

The new frontiers of Planetary Health research have revealed that MERS, SARS, West Nile, Zika and now, COVID-19 can all be traced back to new interactions between humans and animals caused by human development or climate change. Of which food is one of the biggest drivers.

The World Economic Forum states it in terms that couldn’t be simpler: the world has lost 60% of all wildlife in the last 50 years while the number of new infectious diseases has quadrupled in the last 60 years.

COVID-19 is bad. As we publish, it has already killed over 265,000 people. Estimates are that it could create 195 million job losses. The World Food Programme is predicting famines of “biblical” proportions and Oxfam believes that it will push progress on poverty back nearly 30 years.

But we’ve known it was coming.

Bill Gates stood on the stage of the TED conference in 2015 and made a prediction that was chilling in its accuracy. By modelling the impact of Ebola, he predicted that a virus (not war or terrorism) would be the next major global killer and that a future pandemic would cost the global economy $3 trillion. He proposed a number of measures that would mitigate both impacts – almost none of which were implemented.

Sometimes it sucks to be right...

But perhaps the warnings were easier to ignore when they didn’t come with a death toll of hundreds of thousands and images of our own hospitals in a state of chaos.

Until the last few weeks, climate impacts have mostly been seen through the lens of the economy and the environment. Today, for the first time on a massive scale in the developed world, we are being brutally exposed to the human costs of climate change.

Human development and climate change helped cause COVID-19 (in this case, deforestation of bat habitats and the sale of live bats in China). As a result, more people are expected to face food insecurity in the coming months than at any time in the last one hundred years, healthcare systems are failing globally, hundreds of thousands of people, maybe millions will die, and we will have a “poverty tsunami” in developing countries.

And how we eat is the single biggest contributor to this.

There are three changes we need to make now to our food system. These changes need to be driven by policy but are not the sole responsibility of government.

Business needs to adopt them. Company by company, one firm at a time.

The first change is that we need to shift away from a take-make-dispose culture in our food production to a more circular approach to eliminate waste in all forms.

Remember, 1/3 of all food produced is wasted.

From the farm, where soil erosion reduces 10% of yield, costing $3 billion per year just in Canada, to manufacturers who need to design recipes and packaging that generate zero waste. From restaurants and retailers who need to rethink how they manage plate sizes and product to prevent waste and dumping of unsold items,  to consumers, who throw out food and beverages because of best before dates (that are often guidelines), package sizes and bulk purchasing.

By ensuring that nothing leaves the system, and that all unavoidable waste is repurposed, we can significantly change the impact that food has on the planet while at the same time improving the bottom line of the food and beverage industry.

Last year, in partnership with the Walmart Foundation, the Canadian Centre for Food Integrity and Enviro-Stewards, we looked at food waste generated in just 1% of Canadian food and beverage manufacturers. We identified an astonishing 9 million kgs of food being wasted annually. That’s 15 million meals and 32 thousand tonnes of CO2e that could be reduced each year (the equivalent of taking 7,000 cars off the road annually) – from just one percent, of just one part of our food system, just in Canada.

The opportunity and the cost here is staggering. And while we also need to develop more regenerative agriculture and natural capital financial models to value our resources, if we just focused on creating a more circular system, the impact on climate and on human health and well-being would be remarkable.

The second change we need to make now is to create more transparency in our supply chains.

Nearly half of the goods we use everyday in North America contains palm oil, of which 70% of those goods are foods, a commodity sourced primarily from Indonesia and Malaysia (who account for 84% of all production).

Yet, Indonesia is one of the most at risk countries from climate change. 40% of its population face high mortality risks in the coming decades. Over 6 million hectares of its forests were cleared for monocrop agricultural production in the last decade (each hectare was home to 200 species of plant and animal).

We know that climate and biodiversity loss drive pandemics. So what happens if a new disease emerges here that has the transmission capacity of COVID-19, but a much higher rate of mortality? Borders get shuttered, palm oil supplies dry up, and a significant number of food products in our stores disappear from the shelves.

A few months ago, this scenario could have been easily dismissed as scaremongering. Today we know differently.

The huge complexity of our supply chains needs to change.

Food and beverage manufacturers need to revisit their recipes and source ingredients closer to home. Initiatives like IBM’s Food Trust, which leverages blockchain technology to provide transparency from farm to fork, need to be rolled out by the large farmers, manufacturers and retailers. And we need to start pricing in the damage to the climate that our food and beverage products are creating.

Millions of people in Indonesia are now at mortal risk of climate-driven catastrophes, and food is the biggest contributor to climate change. So how much longer can we continue pretending that the palm oil in our margarines, chocolate, soaps and ready to eat Canadian meals isn’t part of the problem?

Shortening supply chains and circularity – the first two changes we need – are deeply interconnected. And there are scaled models of how to achieve both.

The City of Guelph, in Ontario was recently awarded $10M by the Canadian government to create the first circular food economy in the world. Food companies, farmers, restaurants and retailers have come together to ensure that any unavoidable waste products (such as spent grains from brewing, for example) are repurposed to another part of the economy (the spent grains are feeding insects, that then turn into a high value protein for animal feed). Supply chains are shortening as farmers build relationships with manufacturers, and more food is available to support the most vulnerable through food banks and other initiatives. This example shows just what can be achieved when we are prepared to challenge the take-make-dispose food status quo: all parts of the community benefit, food security is improved and the environmental and human impacts of how we eat are connected in whole new ways.

The third change is that we need to value the unsung heroes of our food system – the people who grow, make and deliver our food.

For too long, the people who grow our products, who grade our eggs, who butcher our hogs, who bake our bread and who drive the trucks through the night to ensure these products reach our grocery stores, have been paid too little.

We have built a food system where people are often seen as little more than operators of machinery, a necessary evil to be managed. What COVID-19 has shown is that when the people processing the food get sick, and can’t be on the line, or the people driving the trucks need to care for their loved ones, and can’t deliver the products, our food supply is seriously challenged.

For the first time, we are starting to realize the importance of the people in the food system.

While the health workers have been rightly championed as the heroes of this pandemic, the frontline workers of food deserve (in my humble opinion) similar recognition. Companies have seen workers pulling together to keep farms and manufacturing lines running and food and beverage moving to those who need it.

It’s time to stop paying minimum wage to the people who make our food system work. They are some of the most valuable members of our national workforce and they need to be recognized as such.

Better paid people, producing food and beverage in a circular system with little to no waste, sourced in ways that does as little damage to the planet as possible. This is this vision that I fight for every day in my work with companies and governments.

We are reaching the end of the beginning of the COVID-19 pandemic. It is time to plan for what comes next and we cannot go back to business as usual. It will just accelerate the cycle of destruction.

Economic regrowth plans will have to include investment to help the food and beverage industry implement these three changes. There will be costs, but there will be greater returns: every company we help to reduce its food loss and waste saves on average a quarter of a million dollars per year.

Keeping the shelves stocked over the last few months has required a deep level of commitment from thousands of men and women at all levels of the food chain. It has shown that there is a hunger to fix our broken food system.

Company by company, one firm at a time, that’s the kind of change we can feed.

The How-To on Finding Your Why

Getting by with A Little Help from Our Friends